The Santa Caterina Hermitage, today a centre for artistic and scientific creations 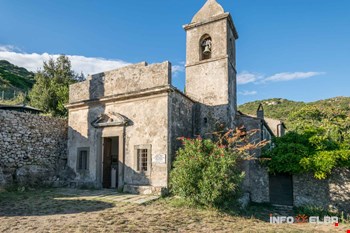 The Santa Caterina Hermitage is on the road from Rio nell'Elba to Nisporto.

You have to leave your car in a small clearing and follow a short, grit road (signposted) with cypress trees on either side surrounded by lush, colourful and beautifully scented Mediterranean bush.

The walls around the church date back to 1624, but there is no doubt that the church, hermitage and "hortus conclusus" of the hermitage were all built with stones that had been used more than once over 1500 years and before the arrival of the first hermit. The building as it is today stands on top of an original small temple that was older and smaller, whose apse was facing the mountain.

The facade has a gable that comes to an end at the top and two small windows while the inside consists of a nave that ends at an altar with columns on either side made from the dark stones that came from the local quarries. The top of the low steeple is pyramid shaped.

Legend has it that the hermitage was enlarged and enhanced after Santa Caterina appeared before a shepherd boy one spring afternoon wearing a beautiful white dress, and that she asked him to celebrate this vision every Easter Monday.

So once a year, every Easter Monday, the people from Rio nell'Elba go up to the Hermitage to celebrate the "sportella" feast, the traditional cake whose origins seem to come from a pagan rite that had something to do with spring and fertility.

After these miraculous visions and the renovation work that was carried out on the building, the hermitage became a pilgrimage destination for all of the locals in Elba.

The sailors used to come here to thank the Saint for having saved them from the dangers of the sea, and the men from Rio used to go to the church to pray before going out to sea, saying goodbye to her by waving their hat and hoisting their flags at full mast.

Interesting information: There are many legends connected to the beautiful painting of the Mystic Marriage of Saint Caterina, commissioned and given by the Appiani family and that in the past enhanced the altar inside the church. It is said that in the buyer's opinion the artist had painted the Saint's neck too long, but that he refused to change it, so only a long night of intense praying managed to bring the neck back to its right length.

The last keeper lived in the sanctuary until 1858, and since then the church was completely abandoned and fell into ruin, and burglars even stole some very valuable objects: the large painting of Saint Caterina, the coat of arms, and a strange marble mask used for the offerings.

Thanks to the brilliant intuition of the German photographer and writer Hans Georg Berger, who came to the hermitage over 30 years ago and found it in complete ruins, today the Santa Caterina Hermitage has had a new lease of life, and is now a crossroads of knowledge and thinking: a lively centre for artistic and scientific creations, often home to art and photography exhibitions.

Since the 90s, the Santa Caterina Hermitage has been home of the dei Semplici Gardens, a sort of catalogue of samples, that came to be in an attempt to encourage research and initiatives as regards the natural and cultivated flora both on the Island of Elba and the Tuscan islands, and aims at protecting the biodiversity as well as bringing the botanical uses to people's knowledge.