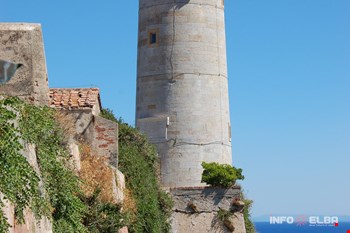 Fort Stella, as are also Fort Falcone and the Linguella Tower, is one of the major parts of the Medicean fortifications built by Giovan Battista Bellucci and Giovanni Camerini.

Star shaped (hence the name), the Fort stands 49 metres a.s.l. on the second hill that looks over the town of Portoferraio. As you can read on the plaque on the right of the large entrance, Fort Stella was built in 1548 by Cosimo l Grand Duke of Tuscany in order to defend Cosmopoli; the plaque above the main entrance, on the other hand, is in memory of when Cosmopoli was given back to the Grand Duke Ferdinand lll Lorena in 1815 after the Congress of Vienna. 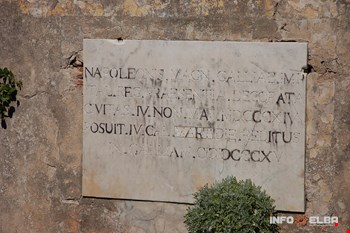 Above the entrance there is a bust of Cosimo l,. It was made by Benvenuto Cellini, but in 1781 the Grand Duke Pietro Leopoldo (the first person in the world to legally abolish the death penalty), had it removed and taken to Florence; you can now admire it in the Bargello Museum.

The Grand Duke Leopoldo also had the circular lighthouse built in place of the original one. The historian Sebastiano Lombardi described it as the most beautiful and magnificent in all of the Mediterranean:

This lighthouse stands high 65 metres above the sea. To get to the light once you are inside the lighthouse you have to go up an eighty step spiral staircase. The light is absolutely beautiful, with large iron bars all round it, and 17 thousand pounds of the same type of bars were also used for the actual lighthouse. All the plates of glass are Bohemian Crystal, sealed so well together that no air whatsover passes through. The inside of the light is fully lined with sheets of copper, the outside with lead, and on top there is a beautiful golden ball with a cross on it.

This lighthouse lights up the sea surface as far as the Cupola, and is without a doubt the most beautiful and magnificent one in all of the Mediterranean. I went to France twice in my young days in 1757 and 1760, and I looked closely at all the lighhouses, not only those in France, but all that were to be seen as far down as Livorno, and I can honestly say that none can compare with the one in Porto Ferrajo, as regards both its height and where it stands.

Something interesting: it is said that as soon as Napoleon landed in Elba he immediately went to Fort Stella to see the bust of Cosimo sculptured by Benvenuto Cellini; on arriving, unfortunately, he was told it had been taken to the Grand Duke's capital some decades before. Who knows if he had intended taking it to the Louvre along with many other Italian works of art!