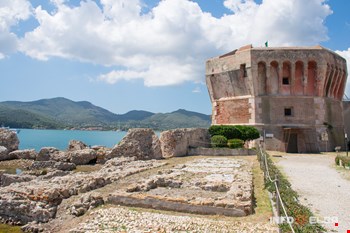 Thanks to is hexagonal shape, you will recognise the Martello Tower or Linguella Tower, a perfect example of military defence for the port, as soon as you enter the port of Portoferraio. A long, heavy chain went from the Linguella Tower as far as the Gallo Tower, acting as a military defence no one could get past. In the 17th century, on the Grand Duke Ferdinand ll's request, the ramparts next to it that looked onto the sea and the docks, were reinforced. The San Francesco rampart and the sentry box with the Lorraine cross on top were rebuilt after their destruction during the war.

Initially it was used for military reasons, then for storing salt, then for preserving tuna fish and storing the fishing equipment. In the 18th century the Grand Dukes of Lorraine had it made into a prison.

At one point during the war it was partially destroyed, but in 1977 complete restoration works gave it back its original splendour, and the remains of a Roman villa were discovered..

It was built right on the rocks, and the upper part of the building sticks out from the lower part, with strong brackets all round the terrace that was originally used as a watch tower.

Interesting facts: The Martello Tower is also called the Passanante Tower; Passanante was an anarchic from Lucania, and on November 17th 1878, holding only a small knife in his hand, he tried to kill Umberto l of Savoia, the King of Italy, who was on a visit to Naples: The attempt was a complete failure, and he was put in prison for ten years, tied to a chain that weighed 18 kilos, and locked in a cell that was only 1,40 metres high with no light at all and no latrine. Each time the sailors went past the tower they would hear his constant moaning and wailing, so they started calling it the Passanante Tower.

In 1933 Sandro Pertini was also imprisoned in the Linguella Tower, while waiting to be tried for having insulted a prison guard; this was however part of a judiciary process that had started the year before while, as a socialist lawyer he had been condemned and imprisoned in Pianosa because he had clearly declared his anti fascist views.