Historical evidence of the Pisan rule on the Island of Elba

The Tower of San Giovanni dates back approximately to the XII-XIII centuries when the Island of Elba, under the rule of the Republic of Pisa, needed to build a defence watchtower. 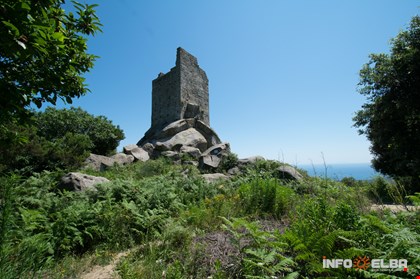 The Tower, at a height of 300 metres, is on the slopes of Monte Perone overlooking the gulf of Marina di Campo - at one time one of the bays that was most at risk as regards attacks coming from the sea - and almost seems to rise up from the huge granite rock on which it stands. In those days, threats of Saracen attacks came from one side, while on the other side the hostility between Pisa and Genova who both wanted to control the Mediterranean, soon turned into war, and this explains why the Tower was in a truly strategic position both for watching over the area and for signal communication; today, you can enjoy the breathtaking view it offers.

The Tower is square shaped, has two floors and a control balcony, that unfortunately was completely destroyed after an enemy attack; the only openings are a window and an entrance whose only access was via a folding ladder, so as to make it more difficult for the enemies if they tried to climb up.

For many, many years it lay abandoned,made worse by frequent collapses, and despite some renovation work that has at least made the walls stronger, it is both difficult and dangerous to go inside.

On the contrary, getting to the tower is easy: follow the winding, uphill road for Monte Perone, and at one point you will see it on your right at the end of a path surrounded by low scrub consisting of fern, broom and strawberry trees, with a small picnic area in the shade right next to it