Clearly seen even from the ferry as you enter the port in Portoferraio, standing at a height of 394 metres on the mountain bearing the same name, the Volterraio Castle is the most ancient fortification on all the Island of Elba. 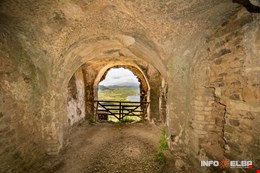 The first part to be built was of Etruscan origin; it was made bigger in 1281 by the Pisans who used it solely as a military defence and in 1440 it was made stronger. It is one of the few fortresses in Elba never to have been raided by the Turkish pirates who ransacked Elba on more than one occasion. In the ten years from 1544 to 1554, many locals sought refuge and protection within the heavy walls of the Volterraio Castle; thanks to its strategic position, which means it can be seen from almost any part of the Island, it will always be a watchful eye that protects the whole island.

Although it was bought over by the Tuscan Archipelago National Park in 1999, the castle lay in complete ruins for a long time.

In January 2016 the first steps in its restorationmake the fortress safe as well as give some of the architectural elements a new lease of life, like the main entrance, the path round the battlements, the tower with its footbridge and the chapel.

On 18th July 2017 the public was able to see completion of the second part of the restoration work. The old paths to get to it have been improved, with with wooden stepways and handrails to help you along. Thanks to the help and collaboration of the archaeological Superintendence even the strong>original floors have been brought back to life.

It is well worth the effort of walking up to the top of the hill where it stands, not only to see what remains of its magnificent walls, but also to admire the unique and breathtaking view of the gulf of Portoferraio.

The structure of the Castle

Volterraio Castle has a hexagonal shape. The oldest parts of the castle are the defense walls around it and the square shaped tower that was used as a watchtower. Access to the tower is across the wooden drawbridge and along the path round the battlements Thanks to a sort of signal system from the watchtower it was possible to communicate with the other towers in the surrounding area as well as with some along the coast of Tuscany.