Dating back to the I century BC, it was a luxurious villa that dominated the gulf of Portoferraio 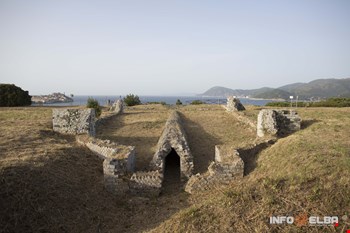 Dating back to the I century BC, the Roman Villa in Le Grotte is the only one of the three pleasure villas discovered on the Island of Elba not to have undergone building work "on top of it" over the centuries.

Left and forgotten at the end of the I century AD, while the extension work on the Linguella Roman villa was being carried out, between 1799 and 1801 it was considered of strategic importance for keeping the artillery battery during the war between France and the Reign of Naples.

Thanks to excavations between 1960 and 1972, the structure of the villa is very clear: built entirely in opus reticulatum it opens out across a central axis consisting of a large rectangular tank surrounded by a peristilium; it had three large gardens, one of which ran along the wall facing the coast, with a scenic view of the gulf of Portoferraio, a hortus conclususwith frescos on the walls, a part for the dominus and for the domina, another part for the thermal baths with calidarium and frigidarium. 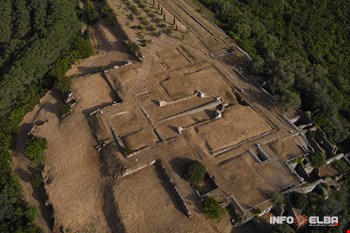 The wash areas, that is the cryptoporticus, the water tanks and the store rooms went well over where the road is today, with a small jetty built in granite in the area below for those who arrived at the villa by sea.

In 2014 several archaeological remains were found both in San Giovanni and in the Roman Villa itself, and this leads us to believe that the the Villa probably belonged to Marco Valerio Messalla of the ancient Valeri family.

The seals on some amphoras and doliums (large, round terracotta containers used for transporting wine) were also found, with inscriptions on them made by a slave, and they bear the name of both the owner of the doliums and of the wine inside them.

This theory is also backed up by some historical details like the writings of Ovid, in which he declares that this ancient villa on the Island of Elba belonged to the Valeri family.