The Tonietti Mausoleum is in Cavo, in a deserted and scenic area of Mount Lentisco in the Commune of Rio Marina. It is a pleasant excursion that takes about 30 minutes if you walk from the town of Cavo.

It was designed by the Florentine architect Adolfo Coppedè in the year 1900 for the Tonietti family.

Ugo Ubaldo Tonietti, son of Giuseppe, wanted it built, because in 1888 the contract of running the mines on the Island of Elba was passed on to him when his father died. The director of the mines was Pilade del Buono.

Tonietti and del Buono hadn't gone into partnership simply because they wanted to run the mines and minerals together, but also because they hoped to start a steel industry on the Island of Elba. On July 29th, having also been granted the contract of 1897, Ugo Ubaldo and del Buono founded "Elba, the unknown society of mines and blast furnaces".

It was precisely in this positive time of his life that Tonietti wanted the Mausoleum built in memory of his father Giuseppe, as well as having a private tomb for the family. The mausoleum, however never did become a burial place for the family because permission to have it inside the cemetery was never granted. 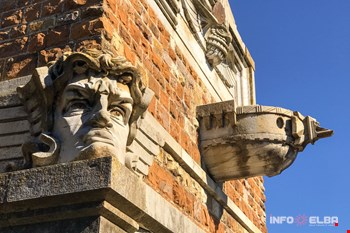 The Mausoleum is a majestic square shaped tower that stands tall and has a marble stairway at the entrance. This unusual architectural style brings the naval world to mind because it resembles a lighthouse.

By choosing to have the Mausoleum built in this style, Coppodè showed everybody that he was both a very skilled architect and painter. The decorations in liberty style are even more impressive from the outside.

As you enter the Mausoleum you can't help but notice that above the words "Tonietti Family" there is an owl with its wings spread about to take flight.

On the side walls of the entrance, as if protecting the door and the old, wrought iron gate, you can see a double row of columns embellished with lion heads. Decorations of Roman-imperial inspiration are the two pinkish,ship-like bows at both sides as well as the somewhat threatening protomes at the corners of the first floor.

On the second floor you can see a large, marble opening with portholes to allow some light in inside, originally closed with stained glass, and with emblems with marine images on them.

There is a round part on the top shaped like an ancient lantern of a lighthouse.

Unfortunately both the inside and the outside of the building are in a bad way, ruined by graffiti and vandals. Inside nothing is left of the original decorations.

The internal cast iron spiral staircase that takes you to the second level is also in very poor condition. Once you're on the first floor you get the feeling you're in a watchtower, and if you look out of any of the four portholes you will be struck by the breathtaking view all around: the Tyrrhenian coastline and the Island of Topi.

To get to the very top you need to go up what is left of a wrought iron spiral staircase but it is somewhat risky.