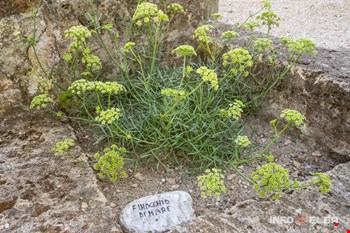 The idea of the Dei Semplici Garden, next to the Santa Caterina Hermitage in Rio nell'Elba, came to Professors G. Corsi and F. Garbari in 1990, with two aims: promoting and spreading knowledge about both naturally grown and cultivated plants in the Tuscan Archipelago, and keeping the ethnobotanical traditions connected to these plants alive.

Besides this, the building had to be a catalytic element for new production ideas in the agricultural and environmental field, in a financial and occupational frame of development, in harmony with the resources of the land and the customs of the local communities. Their main aim was, therefore, that of protecting and making the most of those species of particular naturalistic, pharmaceutical, agrarian and forestal interest in the Tuscan Archipelago, so as to become a natural part of the numerous institutional activities of the Tuscan Archipelago National Park, like the protection of natural resources, the most important aspect of the insular biodiversity.

The passion and enthusiasm for the Dei Semplici Garden is still very much alive, thanks to the contribution of privateers (Voluntary workers, the Friends of the Hermitage Association), the Commune of Rio nell'Elba when the Garden first came to be, and later, also thanks to public offices like the Region of Tuscany, the Province of Livorno, the Mountain Board and the Archipelago National Park.

The scientific aspect, covering both naturally grown and cultivated plants, is in the hands of the Department of Research of Botanical Science of the University of Pisa, and the Sant'Anna Advanced School in Pisa. Naturally grown, unique and rare plants (endemic) from various, typical areas of Elba have been found, picked and classified, each in their own section.

The entire garden is divided into 10 different theme areas, and only stones, tuff or wood are used to create and separate each area, depending on whether in that area there are cultivated plants, or whether you can walk there, or whether you can stop. The ten different garden areas are: the Mediterranean bush, the alcove area, the marine dune flora, the religious plants of past civilizations, plants from Elba of the past, the maze, the amphitheatre, the butterfly garden, the orchard and the large field.

Moreover, the major different types of fruit trees and plants (plum, pear, peach, cherry, almond and also some vines), some of which run a high risk of becoming exteinct, have been planted and classified in a special catalogue garden. 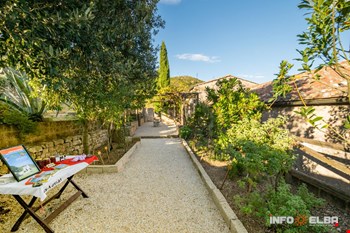 At present the Garden is part of a project financed by the ARSIA for the Region of Tuscany (Agenzia Regionale per lo Sviluppo e l'Innovazione nel settore Agricolo-forestale, that is, the Regional Board for the Development and Innovation in the Agricultural-forestal field), that aims at recovering, classifying, preserving and improving autochthonous germ plasm. This project, presented to the ARSIA by the Sant'Anna Advanced School and territorial Boards (like the Town, Province, Park, APT, Hermitage and local Firms), has the sole aim of registering the fruit heritage across Elba and foreseeing a scientific classification (pomological and ethnobotanical files, DNA tests, nutraceutics etc.).

Those species that turn out to have a deep-rooted historical, cultural, social or financial link with the territory will be listed in the Regional Inventory. A general picture will be drawn up, as well as a computerized database with the results of the research, in order to highlight the species considered most suitable for replantation in the territory. And finally a "basket of products" that best reflect the secular local tradition of the island's gastronomy will be created, involving local workmanship (agriculturalists, processors, sellers, restaurants etc.) 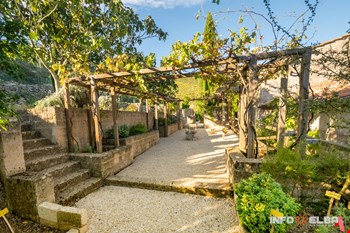 Recovering, classifying and re distributing the autochthonous varieties of the past doesn't mean going back in time, agriculturally speaking, but rather, accepting that the truth must be faced: ecological and environmental problems do exist in Tuscany, but they can be solved by doing our best to produce niche products, just like many agrobusinesses and tourism industries have already started doing.

Thanks to its fruit tree register that contains information concerning agricultural and ethnobotanical traditions of the Archipelago, the Dei Semplici Garden at the Santa Caterina Hermitage has now become an official member of the ARSIA Bank of Tuscan Germ Plasm, and can only improve its formative, cultural and touristic role.

This information comes from the article about the Dei Semplici Garden in Elba, museum of live plants, by Professor Agostino Stefani, Botanics and Biology lecturer at the Sant'Anna Advanced School of University Studies in Pisa, published in the InformaRio, num. 1, 2010.