The Foresiana has a vast number of books of historical and cultural importance, second only to the Labronica Library

The origins of the Library are connected with Napoleon Bonaparte: when he left the Island at the end of his exile, he donated his personal library of 2000 volumes to the people of Portoferraio. Before the start of his exile, Napoleon had chosen about 1000 volumes on history, literature (even the first story of French literature by Lyceé), military arts, geography, legislation, and Latin and Greek classics from the two libraries of the Fontainebleau Castle. During his ten month exile he also got his uncle, Cardinal Fesch, to send him about an extra hundred books or so, among which there was a bible in 17 volumes, as well as other books from Military Engineers and from publishers from Livorno, Genova and Civitavecchia.

As soon as Napoleon left the Island, the Mayor, Mr Traditi, took care of the library which he had catalogued, and in the summer of 1815 it was opened to the public. After his defeat in Waterloo, some books being returned to their previous owners, other volumes being moved from place to place then ending up lost or stolen, only about 1000 of the original batch are left (kept now inside the Palazzina dei Mulini). 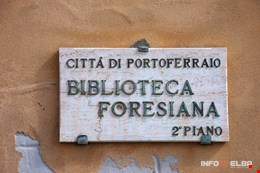 With the Unification of Italy, the Commune of Portoferraio and the Ministry of Public Education decided to create a complete Communal Library from the important books Napoleon had donated, so intellectuals, normal citizens and institutions were asked to donate books. Many people obliged, even General Giuseppe Garibaldi sent booklets given to him by patriots; the humanist Mario Foresi also obliged, and sent 14.000 very important historical and cultural volumes, so it is not a coincidence that the library is called after him.

In the Foresiana Library today, as well as what Napoleon left, there are precious books of the 1500s given by Foresi and signed by D'Annunzio, or from Roster (creator of the Ottone Botanic Gardens), and Reiter (who donated important works on Napoleon's Empire and on the First World War); you can also find a complete section on Elba and on the Tuscan Archipelago, as well as antique newspapers where you can read about Elba's past and the people who lived here.

Following the footsteps of Napoleon