Opened in 2013, but officially inaugurated in January 2014, the Museum of minerals and gems in San Piero, in the Commune of Campo nell'Elba, is in the two storey building that was once the Primary School.

The museum is dedicated to Luigi Celleri (1828-1900), once an inhabitant of San Piero in Campo, who had devoted his life to looking for minerals on the western side of Elba, initially together with Raffaello Foresi, and later on behalf of Giorgio Roster and Bista Toscanelli, all of whom had acquired several excavation rights over the pegmatite veins on the western side of Elba. Luigi Celleri later carried out some mineral research also on behalf of Pilade Del Buono concerning the institution of a Mineral Museum in the Demifoff Art Gallery inside Napoleon's Villa in San Martino (Portoferraio). And it was thanks to that research that several important minerals like "gummy" quartz (in Palombaia) and wollastonite (in Cavoli) came to the light. 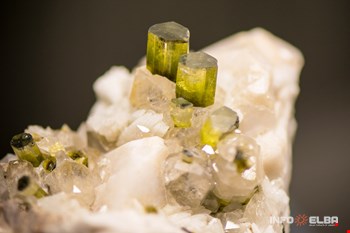 The first floor of the museum is divided into two parts, one where the minerals and gems are on show, the other where you can watch both film shows and informative audio-visual documentaries. There are also many detailed historical and mineralogy show boards along the corridor.

There are also 12 glass cabinets where you can admire all the minerals. Not only are there historical minerals from the area of Campo nell'Elba, but also some iron minerals kindly lent by the Mineral Park of Rio Marina, while another room is dedicated to the rocks from which the main minerals from the Island of Elba are extracted.

In 2015 some new minerals that were part of the personal collection belonging to the engineer Mr Pini, were kindly given to the museum by his family.

There is also another area where you can see the gems kindly lent by many private owners, above all Professor Federico Pezzotta, who runs the Mineral Museum in Milan.

The history of the mines