Renovation of the Villa dei Mulini: the museum was re-opened in the summer of 2013

In view of Napoleon's Bicentenary (2014), the first renovations done on the museum were completed at the end of the summer of 2013, so, after a temporary closure, it was once again opened to the public..

Thanks to the renovation work, although several structural changes were made to the internal rooms they were still exactly as they had been during the Emperor's stayThe original openings were restored (although some were opened while others were closed), and while both the original interior and exterior doors and windows were restored, a dividing wall in one of the internal rooms was put up; after official documents concerning the original colours were found, the plaster on the walls was changed from pink to yellow. 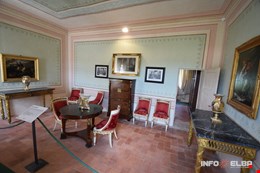 In order to fully understand what each room was used for, and which were private and which were public, a deep study was carried out, after which some were changed. The Palazzina dei Mulini is the only Emperor's residence in Europe, that is to say, where he officially lived for some time (Napoleon's homes are 47 all in all).

Once the restoration work had been completed, Roberta Martinelli, the head admimistrator of the Napoleonic museum, along with the architect Velia Gini, drew up a detailed and accurate inventory of all the objects to be found in each room during the time Napoleon stayed there. 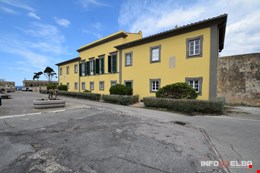 We can only hope that any further renovations will be carried out on the gardens around the building too, rich in plants of lemon and orange trees in vases, as well as herbs and flowers that the Emperor had sent directly from the Botanical Gardens in Naples, the city where his sister lived; and last but not least not let's hope some completion work will also be done on the interior decoration with all the silk around the walls,