Elba in one day

Let's start by saying that seeing all of the Island of Elba in one day is impossible.

Although it is only 27 km long and 18 km wide, it has so many different types of environments that probably even a whole month wouldn't be long enough to say you know it really well. Elba is like a treasure chest full of an unlimited number of paths that cross the island, numerous beaches and coves, undewater routes, mines, museums, and places of historical and naturalistic interest.

However, if you only have one day for visiting the Island of Elba, here are some suggestions for making the best of your day, even if it will only be a small taste of this Mediterranean island.

If you come to the island of Elba on a one day trip only, we suggest you cross over on an early morning ferry for Portoferraio, it will be easier to get to the most significant places on the Island from here.

Palazzina dei Mulini and the Fortress in Portoferraio 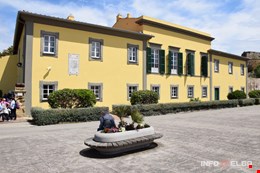 Your first stop has to be the Palazzina dei Mulini, Napoleon's residence, in the historical part of Portoferraio. It takes about twenty minutes to walk here from the port and about an hour to go round the entire building and the gardens. Then head right, in the direction of Forte Falcone: the tallest fort in Portoferraio that Cosimo de'Medici had built in 1548 to defend the town. At this point turn back towards Napoleon's residence, go past it, and you will find yourself inside Fort Stella, built on Portoferraio's second hill, that looks on to the wonderful view of the Medicean dock and the sea strait that separates Elba from the mainland. Now go back to the sea front and stop at the Museum of Napoleonic Antiques, then the Misericordia Church and finally the De Laugier Cultural Centre. All this will have taken you about three hours from start to finish. 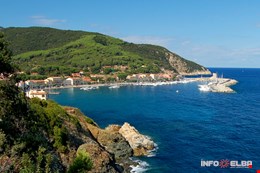 If you have a car, then this is when your tour of the island starts.

Going out of Portoferraio, take the main road for Procchio-Marciana and head for the western side ring road. It should be about an hour before lunch time by now, so we suggest you stop in at one of the fish restaurants in Marciana Marina, maybe in the tiny sea front part of Cotone; on the other hand, you could also keep going until you get to the Medieval hillside town of Marciana, 375 metres above sea level, where you could have a "bruschetta" in the main square at the Lorraine Door; the view from here is breathtaking: below you the sea, beaches and coastline, behind you the magnificent Monte Capanne, 1019 metres high, and on the horizon the Islands of Corsica and Capraia, and the mainland.

If you have an extra hour and there are no clouds in the sky, don't let the chance of a ride up the chairlift to the top of Monte Capanne, the highest mountain in Elba, go by. The chairlift starts just before Marciana and takes you right up to the top in about twenty minutes...we don't want to spoil the surprise for you, we just want to say that you will never forget the breathtaking view from the top.

Marina di Campo and its beaches 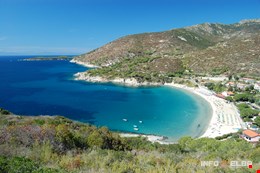 Set off again and head for one of the beautiful, white quartzite sand beaches in this area where a quick swim is a must: Fetovaia, Seccheto or Cavoli. On the other hand, if you prefer to do some shopping, go straight to Marina di Campo, the small, seaside town on the longest beach in Elba.

Apart from the ride up the chairlift to Monte Capanne, all this will have taken you about five hours (2 hours for getting about plus two and a half-three hours for your stops). Sadly it's already time to start heading back to Portoferraio for the ferry. The time was short but at least in only eight hours you have had a taste of Elba's history, its white beaches, its hillside towns, its cuisine and all the variations that makes the largest island of the Tuscan Archipelago so unique.

If you're not travelling by car, you can catch one of the buses that goes to to the western side of the Island and get off either at Marciana Alta or Marina di Campo, (it takes about two and a half hours to go right round without making any stops). The bus station is opposite the port, between the two highest buildings in Portoferraio, called the "skyscrapers"; they leave every half hour in both directions. If you want a really good view, make sure you're on the bus that goes in an anti clockwise direction, heading first for Marciana Marina then Marina di Campo, and make sure you get a window seat on the right. 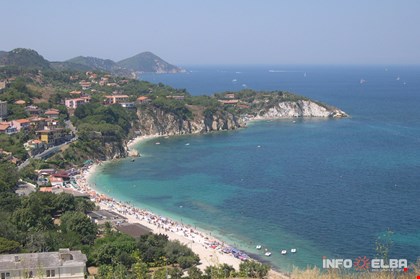 On a scirocco day, if you don't feel like sitting too long on a bus, once you have visited the historical part of Portoferraio, go back along the sea front and head for the Le Ghiaie beach, about a 15 minute walk from the town centre. As the name suggests, the beach consists entirely of white pebbles, and is part of a marine environment protection area; on days when a south wind is blowing, this beach is without a doubt one of the most beautiful on the island of Elba.

If, after your tour of the historical part of Portoferraio, you want to spend the afternoon in a town on the eastern side of the island, head for Porto Azzurro, a journey that takes about half an hour by bus). This small sea town has a beautiful square facing the beach, full of fish restaurants, and if you're not hungry you can just sit on one of the benches in the shade, under the numerous colourful, perfumed creepers.