Portoferraio and its white sands beaches

Today will be a more relaxing day than the other two. Make sure the wind is coming from the south: we'll take you to two beautiful beaches on the northern coast.

The historical part of Portoferraio

The morning will be dedicated to the historical part of Portoferraio. Our tour starts at the Porta a Mare and from the Gran Guardia Hall, where there are often paintings on show done by local artists. From here we'll head for the Biscotteria (Town Buildings), then go up the long stairway that takes you to the Villa Napoleonica dei Mulini. 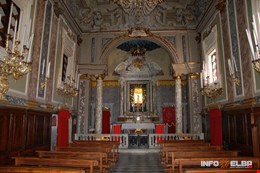 Half way up Salita Napoleone, we can go into the small Misericordia Church where valuable Napoleonic antiques are kept, like the flag he left to Elba, the cast of his hand and the mask he wore on his death bed.

Opposite the Misericordia Church we have the De Laugier Cultural Centre, an ex convent and barracks that is now the precious library and Foresiana picture gallery.

At last we get to the Villa dei Mulini, where Napoleon spent his 300 days of exile in Elba, and where we'll stop for about an hour. Oce out of the villa, we turn left and go into Fort Stella, with its massive lighthouse that the Grand Duke Leopoldo had built, and, to quote the historian Sebastiano Lombardi "is the most beautiful and magnificent lighthouse in all of the Mediterranean". Heading back towards the Villa dei Mulini, we keep going along Via del Falcone until we get to the fort bearing the same name, undoubtedly the most beautiful in Portoferraio.

From Fort falcone the view of the Medicean basin and of the sea separating Elba from the Tuscan coast is breathtaking.

We go downwards from Fort Falcone till we get to Via del Carmine. The Vigilanti, a tiny but very important theatre is on our left; it used to be a deconsacrated church, then Napoleon had it made into a theatre, we think it is well worth a visit. At this point of our morning go back along the seafront because there only remain the Medicean Ramparts to be seen inPortoferraio.

A swim in the sea 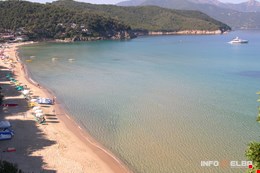 Our historical-cultural visits are for today, so now we deserve to relax on the beach of Le Ghiaie, with its crystal clear sea, or on that of Sansone, whose fine grain white sand has become famous thanks to the Acqua dell'Elba publicity.

If, on the other hand, you got up early and the historical tour of Portoferraio took less than you expected, you could finish your morning off on one of these two beaches then spend the afternoon on the famous, but much more crowded, sandy La Biodola beach, or on the pretty Scaglieri beach, right next to it. 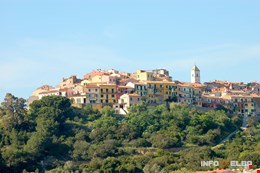 Since you have spent all day in Portoferraio, we suggest you go for a drive to Capoliveri for your dinner, the nice Medieval hillside town on the eastern side of Elba. Capoliveri is fantastic by night: all the squares are bright and lively with the small markets selling typical products, and all the lanes are full of tables of the restaurants where you can savour excellent an tasty local dishes.