Your first swim in the Spring

March, April and May are probably the months when Elba is at its best, when the colours and perfumes of the Mediterranean scrub cover the entire island, the air is fresh, and the sun is just starting to heat the rocks, in other words, the perfect cure for ridding yourself of the stress of city life,

If you're feeling brave and want to go in for your first swim of the season, we suggest you go to the south west, granite part of the island, where the temperature is always higher than in the rest of the island, even in March and April; it is not a coincidence that this part is called Costa del Sole! 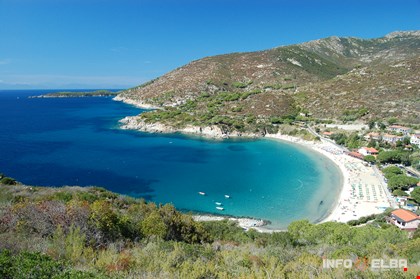 The first beach you come to is Cavoli, a white quartzite sandy beach sheltered from the wind by the granite reliefs behind it; many locals insist that the area directly under the wall at the bottom of the road is the hottest and most sheltered part of the whole coast, so much so that as early as February you can see teenagers in their swimming costume sunbathing on the beach!

A little further along, the next beach is Seccheto: during low season it is popular among families with small children or young couples who want to be alone.

Due to it not being very near Marina di Campo, and the fact that the air here is cooler there because it is in a valley, with a pine grove behind it, Fetovaia is less popular than the other beaches in low season; but precisely because of the fact that it is quieter and less busy means it can be considered one of the most beautiful beaches on the Island of Elba.

Sheltered beaches depending on the windElba Spiagge, Elba Traghetti and Elba Eventi on smartphones and tablets