Elba, as well as another six other islands, is part of the National Park

The Tuscan Archipelago National Park covers over 600 square kilometres of sea that go from Livorno to the Argentario promontory, and it includes seven islands in all:Capraia, Elba, Giannutri, Giglio, Gorgona, Montecristo, Pianosa, as well as the Formiche of Grosseto and other small rocks. The biggest island is Elba (223,5 square km), and the smallest is Gorgona (2,23 square km). The island furthest from the mainland is Montecristo, at a distance of 68 km, while Capraia is only 34 km from Elba.

Despite their being so small, the differences in the type of territory from one island to the other are remarkable: Elba's territory is segmented and complex, Pianosa is flat, Montecristo is shaped like a rocky cone. Along the coastline that has been shaped by the waves, cliffs and grottos alternate with tiny beaches sheltered by wild promontories, and colourful flowers cover the rocks and turret masts so as to remind us that man's presence on the island goes back thousands of years.

Land and morphology depend on the geolocical origins of each island. Gorgona and Montecristo come entirely from granites, Giglio and Elba from both granites and sedimentary rocks (limestone and marl), Giannutri and Pianosa from limestone. Capraia from magmatic rock, both intrusive and effusive.

Before the arrival of tourism, mining was the main industry and source of income for the islands. As the years passed it became more and more important, and the effects of this on the vegetation can still be seen today: an enormous amount of charcoal was needed for timbering the mines and then working the minerals, and this explains why today there are hardly any holm-oaks to be seen. The characteristic layer of vegetation of the islands has now become "high": heather, arbutus berry trees, lentisks and myrtle. 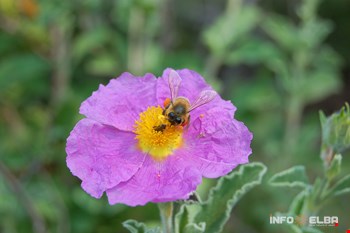 In the windy areas, on the other hand, we find the "short" layer of vegetation, with mostly red and sea cistus. A beautiful wood full of hornbeam, alder, chestnut trees, as well as yew trees, can be found on the sides of Monte Capanne, on the Island of Elba. Endemisms like the violas and the cornflours of Elba, or the toadflax of Capraia, are vey important, because they don't grow on all the islands.

The fauna consists mainly of birds: the herring gull (600 nesting pairs), the gull (about 200 pairs), the cormorant (30 pairs), the shearwater, the raven, the peregrine falcon, the thrush, the wild pigeon. There are also many migratory birds too.

The sea around all these islands is like an immense field where all the characteristic Tyrrhenian Sea flora grows: posidonia, sea grass, sea anemonies, coral and starfish. There are also different species of dolphins, as well as the dusky grouper and the rare moonfish. An odd time some sperm whales and fin whales are sighted. Very, very rarely some monk seals are sighted.

One of the projects carried out by the PNAT is how to obtain a CETS: the European Card of Eco-Friendly Tourism.

CETS: the aim of the Park

The Park has started the procedure for obtaining the CETS and in 2016 was given a positive assessment on behalf of the Europarc.

The information offices of the Tuscan Archipelago National Park aim at giving tourists a friendly, naturalistic welcome in an eco friendly environment.

CEA and visiting Centre in Marciana

Information leaflets available here written by the Park Authorities plus the chance to take part in a more detailed visit.

A valid reference and meeting point of the Park, that aims at promoting the characteristics of the mining traditions of the eastern side of Elba.

The Environmental Education Centre in Lacona is also an Info Park and provides tourists with information.

If you wish information about visiting and going on an excursion on the Island of Pianosa just contact the staff at the Park Authority offices.

Here you will be given all the information you need to appreciate the beauty of the Island of Capraia to the full.

The new InfoPoint built within the old Fishermen's Shed

Elba is one of the 7 islands that make up the Tuscan Archipelago, the others are: Giglio, Montecristo, Capraia, Pianosa, Giannutri and Gorgona.

Montecristo, famous thanks to the novel "The Count of Monecristo" by Dumas, is one of the most rugged and inaccessible islands in the Tuscan Archipelago.

Island of Pianosa in the Tuscan Archipelago National Park that up till 1997 was a maximum security penal settlement.

Capraia, the only volcanic island in the Tuscan Archipelago, at a distance of 54 km is one of the farthest islands from the mainland

Giglio, sadly famous today because of the Concordia disaster, is better known in the archipelago thanks to its unique environment and crystal clear sea

The Island of Giannutri is also called Seagull Island, because every year many herring gulls choose to make their nests there.

Gorgona, one of the islands in the Tuscan Archipelago where there is also a penal settlement, where the prisoners work the land and look after the animals.

Excursions to the Tuscan islands

Several shipping companies offer excursions and mini cruises from the Island of Elba to other islands of the Tuscan Archipelago.

Thanks to the connections set up by the Park, you can now go on a daily tour of the Island of Montecristo, depending if days requested have been authorized.

You can go to Pianosa all year round, departure is from the port in Marina di Campo.

In the summer you can get to Capraia from Portoferraio and Marciana Marina.

Giglio can become the perfect destination for a one day excursion to the second largest island in the Tuscan Archipelago.

All year round you can get to the island from Porto Santo Stefano while in summer from the island of Giglio.

Find a nest and you find a treasure: useful information if you're looking for sea turtles nests and the best way to protect them.

The International Sanctuary of Marine Mammals is a protected area created in 1999 thanks to an agreement between Italy, France and the Principality of Monaco.

The Butterfly Sanctuary is an unforgettable walk where you will be able to admire over 50 different species of butterflies, some endemic of the Island of Elba.

The UNESCO MaB Reserve of the Tuscany Islands consists of the seven Archipelago islands as well as other small islands between the Tuscan coast and Corsica.

Resto con Life is a project that aims at improving the conditions of natural habitats as well as rare, animal and plant species in the Tuscan islands.