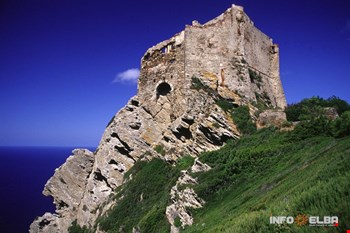 The Island of Gorgona is the smallest and most northern jewel in the archipelago, and is the last prison island in Italy. It is in the Ligurian Sea about 37 km opposite Livorno.

The rocks are mostly ophiolite and calcareous, and the territory is mainly mountainous, with Punta Gorgona being the highest peak at 255 metres above sea level.

Since it is very rich in water, the mountain peaks are covered in lush, Mediterranean bush: woods of holm oaks and Aleppo pine trees, about 400 different species of flowers, some examples of chestnut trees and black alder, and even autochthonous olives known as the "Bianca di Gorgona".

Just like the other islands in the Archipelago, many migrating species of birds come to Gorgona to build their nest .;&nbdp;Nature has remained intact so the sea is still crystal clear and pollution free, thus enabling many rare and delicate species of birds to breed and multiply there.

There has been an agricultural penal settlementin Gorgona since 1869, that was originally a branch of the prison in Pianosa. Here about 70 prisoners work the land either in the vegetable gardens or in the vineyards, as well as looking after the animals, enabling them to make their own wine, cheese and honey.

There are many inlets round the coast of Gorgona, and the most suggestive are Cala Scirocco, where the Grotto of Bove Marino is, once the home of the monk seal, Cala Maestra and Cala Martina.

As well as there being a prison on the island, there were once many fisherman in Gorgona; today there are about 70 locals in the old fishing village although only a few live there all year round.

There are two fortresses on the island: the Ancient Tower that was built under the Pisan rule as both a defense and watchtower, and the New Tower on the west coast of the island.

The Island of Gorgona is one of the most heavily protected islands by the Park Authority, and the entire territory, 100% protected, is classified as area "1". There is only a narrow stretch of sea where you are allowed to moor near Cala dello Scalo, and even that is between two "2" areas where you are allowed to sail, stop there or go scuba diving, but all three are regulated by the Prison Authorities, while the surrounding sea round the island is area "1".

Since it was once a prison settlement, permission to land on Gorgona was only granted by the Prison Authorities. Since 2016, when an official agreement was drawn up between the Commune of Livorno, the Tuscan Archipelago National Park and the Livorno Prison Authorities, access to the Island of Gorgona has been granted to tourists who set off from Livorno.

This new agreement means that a boat leaves from Livorno and goes direct to the pier in Gorgona.

In full respect of the environment visits are however limited; only 75 adults (over 12 years of age) per day, on a maximum of four days a week, and students and schoolchildren on free of charge educational tours during the school year may be held.

If they wish, visitors may go on guided excursions but only on certain routes authorized both by the Park Authorities and the Prison Authorities.

View the calendar of the guided tours on Gorgona

Distances between the other islandsExcursions to the Tuscan islands