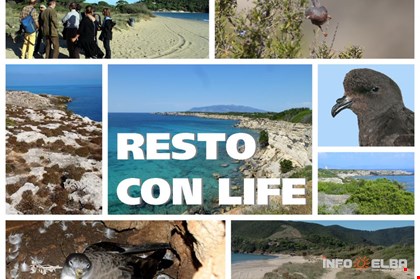 "Resto con Life - Island conservation in Tuscany, restoring natural habitats not only for birds"is a Nature Life project that is sponsored in part by the European Commission. As well as the Tuscan Archipelago National Park that is also the coordinating beneficiary, the Higher Institute for Environmental Research and Protection, the Department of Biology of the University of Bologna and the Territorial Office for Biodiversity of the National Forest Rangers have also all taken part in the project.

The aim of the project is to better protect the wild life (sea birds and birdlife in general, endemic rectiles) as well as their natural habitats on the islands of the Tuscan Archipelago.They hope to reach this goal by ridding the islands of the plant and animal species that are not indigenous (like the black rat, the wild boar, the agave, the Hottentot figs and the Indian figs) and help the natural ones to grow and/or encourage the indegenous species to reproduce; fauna like the Cory's shearwater and the Manx shearwater, the Dartford warbler, the gull, the gecko, the Montecristo goat and the storm petrel; flora like the Phoenician juniper, sea lavender and the sea lily.

Part of the project will be carried out using the most advanced techniques to try and regain or extend the areas of the habitats of greater interest so as not to lose the Biodiversity on theIslands of Montecristo, Giannutri, Pianosa and Elba.

The natural habitats that most interest the project:temporary Mediterranean basins, juniper thickets, woods of holm oaks, grasslands that grow in ultramafic areas, cliffs rich in endemic, Mediterannean bush and the dunes that are more or less unique to Lacona - Island of Elba where, bioengineering techniques are used in an attempt to stabilize and protect the areas from erosion and from excess anthropic misuse.

One of the first steps was to place 6 fake nests on the Island of Pianosa with the hope of enticing the Cory's shearwater to come back (they hadn't been spotted on this flat island for over 30 years) and seemed to prefer making their nests in Montecristo; electronic bird callers were also installed in the hope that the singing and chirping would encourage the species to come back and reproduce.

Since the black rats eat both the eggs and the nestlings of the Cory's shearwater on the Island of Pianosa the number is constantly monitored.