In search of the sea turtles' nests on the beaches 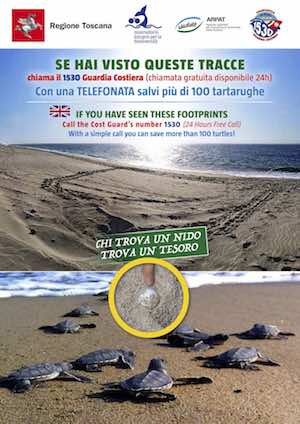 After the unexpected success of the turtles' nest and the birth of the babies in August 2017 on the beach in Marina di Campo, the Caretta caretta have practically become friends of the Island of Elba. Since the species is endangered both on a regional and a global level, it is protected above all during the reproductive period. In an attempt to save them we must all be very careful and avoid doing anything that might put their survival at risk.

Under the title "Find a turtle's nest and you find a treasure" the article published by the Tuscan Biodiversity Observatory (OTB) of the Region of Tuscany, provides useful information if you want to look for a nest that you might find from June to September both along the coasts of the Island of Elba and in Tuscany, as well as protecting the eggs for the 60 days before they hatch.

What you need to know

It all started one night between midnight and 6.00 in the morning. This sea turtle chooses a beach (lined with sun umbrellas and sun beds), swims out of the sea, makes a point of choosing an area on the beach with little light, between 5 and 20 metres from the water's edge, and starts digging. Undisturbed she lays up to 120 eggs in 2 hours, 50 cm under the sand, fills the hole back up with the sand using her rear fins then swims back into the water: this is the start of our adventure!

The sea turtles that lay their eggs in Tuscany belong to the Caretta carettaspecies. This one who laid her eggs is a large one, from 100 to 150 cm long and very heavy; when she comes out of the water she has to drag herself along so she leaves atrail of "footprints" that are easily recognised, similar to those left by small crawler machines, leaving a horse shoe shaped track as she goes up and down to and from the eggs and the tide. If the exact position of where the eggs have been laid is not noticed and pointed out immediately, it will be practically impossible to find it also because the footsteps left by people walking across the sand could hide or bury it. The nest isn't very deep downin the sand, so even a minimal interference could put the eggs at great risk: any type of motor going past, children playing and running in the sand, the sand being levelled off in the morning, the bathing establishments being cleaned, people who are just curious or even acts of vandalism.

Even though you may notice that a turtle has walked across the sand, that doesn't necessarily mean that she has laid any eggs. This is because she chooses where to lay them with great care, and takes the weather conditions, the type of sand, the dunes (if any), the distance from the sea and anything that might disturb her into account. Sometimes she lays the first eggs then returns five days later to lay some more!

The first thing to do

If you do see any turtles or even if you see that a turtle has left a trail on the sand it is vital that youphone the Coast Guards immediately at the free phone number 1530.

Give full details when you phone; even better if you attach some photographs both of the condition of the animal and where you saw it, and be very careful not to frighten it, touch it or disturb it in any way by shouting or pointing light in its face. 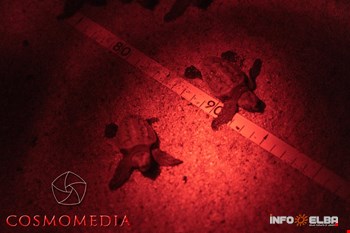 Useful information when the eggs hatch

It usually takes from 50 to 60 days for the eggs to hatch once they are laid, but it depends on several factors: the weather, the temperature of the sand and of course how long it takes the babies to get to the surface. You know the eggs have hatched when you see little, round piles of sand in an area of about 20 cm. It takes at the most 24 hours from the moment the turtles start to push the sand away to when they surface, and this usually occurs late in the evening or at night, when it is dark and the air is cooler.

Turtles may lay their eggs anywhere along the coast and in any of the islands of Tuscany: attempts have been made from Tirrenia (PI) as far as Capalbio (GR).