Running race in stages on the Island of Elba

The Island of Elba running race, held in the month of May, is a running race and as the name says is carried out in stages all over the Island of Elba, and is the perfect occasion to combine a holiday in Elba with a week of sports framed by the spring sun on the island.

It is possibly one of the longest running races on the island; the idea came to a group of friends for the first time in 1991, and over the years it has become an important date not only for the athletes from the Island of Elba but also for runners who come from all over Europe; one year there was even a group from Russia.

220 athletes took part in the first edition, today many more, to the point that now many Italian amateur running athletes take part as guests, like Gianni Poli, who won a marathon in New York, or Laura Fogli, who is one of the Italian, marathon winners, or Orlando Pizzolato who came first on two occasions at the New York marathon as well as winning a silver medal at the European Athletics Championship.

Each of the five stages are held daily along different types of roads. The routes involved enable the athletes to learn a great deal about the territory in Elba, both at sea and mountain level, as they run with the scents of the lush , green Mediterranean bush all around them.

Interesting factTraditionally, the first stage of the race is held along the magnificent Medicean walls of Poroferraio, and the 4,5 km that each runner checks on his own stopwatch gives him a breathtaking and unforgettable view of the bay.

As regards where to stay Napoleon Tour Operator offers special package deals both to the runners and to those who have come to Elba with them: Hotel + Ferry ticketas well as full board including drinks. 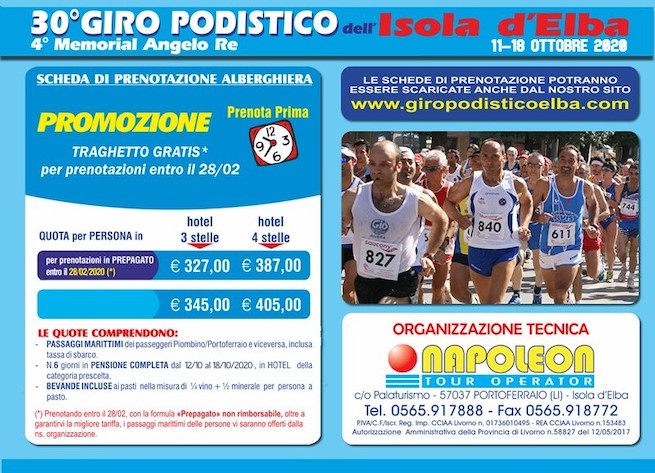 Suggestion from Infoelba: For further information on the routes, how to enroll as well as the rules and regulations of the Island of Elba Running Race please visit our elbaeventi.it portal at the sports category!