How to read the signposts along the roads in Elba 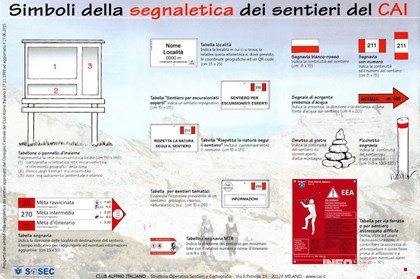 For all those who decide to go out walking along the paths and tracks on the Island of Elba, whether you are an expert excursionist or simply an amateur, you need to be able to read and understand the signposts.

Infact the CAI signposts are red/white/red rectangles and they are linked to a code number, that is usually painted on rocks or trees, but when the signs are vertical they are sometimes painted on poles.

They are either white or the colour of natural wood with a red point and a white/red tail and tells you the direction of the destination of where the path leads to as well as approximately how long it will take the average excursionist to reach it.

The various stopping stages are shown from the bottom to the top according to the distance from where you are.

In the white part of the tail, you can read the path number. You will find this information at both ends of the route and at important crossroads.

Interesting fact:The time it will take you when you are walking uphill is calculated approximately 250 - 300 metres above sea level per hour while if you are walking downhill it is usually about 2/3 of the time it takes to go uphill, and stops are not taken into account.

Abbreviations are often needed when the destination of the route is to be inserted in the chart, so in an attempt to standardise them as much as possible they refer to those in the CAI-TCI guidebooks of the "Monti d'Italia".

These signs are either white or wood coloured and are found at all the important crossroads along the routes (passes, forks, small towns) that are on the map; they tell you the name of where you are and how high it is above sea level. These signs are usually on the same pole as the chart.

Chart telling you to "Respect nature and follow the route"

These signs are either white or wood coloured and can be found near shortcuts and have the aim of asking excursionists not to leave the paths so as to avoid damaging both the actual path and the ground.

On the top right you will see the number of the path you have just followed.

These charts are either white or wood coloured and are found at the beginning and end of a route as well as at the important parts of an excursion route and are marked off in a special and appropriate way, like a route based on a specific theme (history, nature or geology), this is so excursionists are enticed to observe, study, learn more about and fully appreciate and respect the places and environment they are in.

These charts are found at the beginning of a path that has alpine characteristics: and it is usually in the open, partially equipped or challenging either because of the length and development in a particularly rugged environment.

The number of the path is in the top right.

These charts are made of red coloured metal with white letters and are to be found at the beginning of a route that leads to a rope route or an equipped path that is not just challenging but that is also the start of an equipped route and asks all climbers - in 4 languages -not only to use their equipment in the correct manner but to also secure themselves to their harness if necessary.

On the chart, there is usually the name and phone number of who to contact should any of your equipment be damaged. 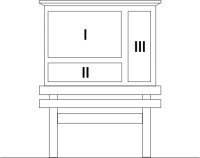 These panels are large and can be found in the towns or at the main areas that lead to the paths for the excursions.

They give you a full description of the routes in the area, from a geographical, environmental and historical point of view.

Horizontal signs (also called intermediate) are those on the ground at the side of a path, usually on stones or tree trunks, and they mean that the path continues and you can follow it in both directions.

A basic road sign that is both white and red

These signs tell you that a path continues; they are right next to junctions and at a distance of every 2-300 metres the path can be easily seen if you take into consideration the environmental situation and its position that will be in full respect of the area.

They are at the start of a path or near junctions as well as in other areas where it is important that the continuity of the path be confirmed.

The number is in the centre of the part painted in white.

These mean that there is drinkable water nearby: it could be a natural spring, or a fountain or a stream near the path, and the arrow points in the direction of the water as well as telling you how many metres away it is.

The arrow sign is only used when you can't see where the water is from the path so it is particularly important for the excursionist.

These are along the paths that go across open fields and grasslands where there are no natural elements on which to attach these signposts thus making it somewhat difficult to find your way.

All the upper part is painted and the roadsign is either in white and red or flagshaped.

The cairns are a very efficient landmark, and they are natural, discreet and everlasting.

These cairns are easy to make out even in bad weather for example during unexpected snowfalls along the paths across high mountains.

Signposts of the routes