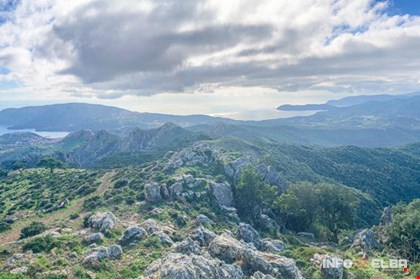 Spectacular, difficult and tiring, the Grande Traversata Elbana (GTE) is the major route if you want to cross the whole of the Island of Elba: you start off from the towns on the furthermost point on the north-eastern side and arrive at the western coast, across the mountains that make up the "backbone" of the island.

Interesting fact: The GTE route was first drawn up by Renato Giombini and Mario Ferrari in the 80s.

If you go on the GTE you start off in the town of Cavo and following the ridge, you continue westwards until you are above Porto Azzurro; you then keep going inland until you get to the top of Monte Perone. At this point you head for Monte Capanne, where you can choose from two routes. One route goes southwards and takes you to the town of Pomonte and from here you can follow the ridge that divides the famous valley of Vallebuia; (49,6 km) the other goes round Monte Capanne, as though separating the coast from the southern side of the island, and you end up on the main road in Patresi in the area known as Mortaio  (55,7 km).

Interesting fact: there is a reason for thedouble choice of finishing in either Pomonte or Patres:, in the former there used to be a bus terminal while in the latter there used to be the one and only hotel that remained open all year round.

You have to bear in mind two things: the entire route means coping with a significant difference in height above sea level and the distance between each of the rest stops is rather long with very few places to stop for a drink of water along the way. so these two aspects make the entire route long and challenging.

If you want to make your excursion seem shorter and hence seem less tiring, we suggest  you do the trekking over 3 days, and, if you want, you can stop for the night in  Porto Azzurro and Procchio.

Apart from one or two small parts the GTE is held entirely within the Tuscan Archipelago National Park so camping anywhere is forbidden, for this reason those who decide to do it in various stages will have stop in a hotel for the night.

Interesting fact: the "record" holder who took the least time on the GTE on the part between Cavo and Pomonte (that is, along the old GTE route that includes the high parts of Monte Orello and Monte Barbatoia) goes to Giovanni Zorn the trail runner from Mugello who did it in 5h37'30.

The entire trek covers a route with the sea below you and the hills and mountains above you, and as you cross the different ecosystems to be found on the island as well as its naturalistic patrimony you will also appreciate many of its most fascinating panoramas that the mountains in Italy have to offer: out towards Corsica, the Tuscan islands and the mainland in Italy.

In winter, not so much because of the cold but more because the days are shorter, it would be much more complicated to face a GTE route, and this is why in summer you're better off diving into the crystal clear water of the sea around the island. This is why the best times of the year to attempt the GTE are without a doubt spring and autumn, also because this is when the air is filled with the fragrant scents of the colourful flowers of the Mediterranean bush that are in full bloom: the yellow broom, the turquoise sea, the grey granite.

From Cavo to Porto Azzurro through a territory that is rich in minerals and colours: the red earth. the green Mediterranean bush and the blue sea

Second part of the GTE that, from the town of Porto Azzurro, across the backbone of the Island of Elba, gets you to Procchio.

Third Stage of the GTE, that from Procchio goes uphill towards Monte Perone and gets you to Pomonte or Patresi (depending on the route you prefer).

Where to sleep during the GTEMap of water dispensers