From Marina di Campo towards Procchio 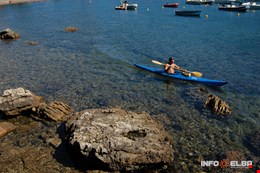 Departure:Marina di Campo
Arrival: Procchio
Length: 47 km
Level of difficulty:the distance could be challenging but you can do it in stages
Interesting aspects:scenic and geological

From the beautiful beach in Marina di Campo you head south-westwards towards Galenzana gulf. The "bagnolo" sand-bed that in low tide stands out above the water is no obstacle to the canoes because they glide easily even when the sea is shallow.

Once you are past Punta Bardella just follow the coast till you get to first the Bue Marino grotto and then the Vescovo grotto that you can easily enter on your kayak. Paddle past Capo Poro and as you sail along the high, rocky coast you will notice several very inviting tiny pebble beaches just waiting for you to swim in. Farther along, the magical colours in the turquoise, crystal clear water of the Azzurro grotto will appear before your very eyes.

Go past the gulf of Cavoli and the sandy beach in Seccheto and you will get to the white sands, very scenic beach of the "Caribbean" FetovaiaGo past the extreme tip and you will be pleasantly surprised by the magical colours Elba has to offer: you go from white to black in the numerous Le Tombe beaches, then the Ogliera rock with its shipwreck that lies at the bottom of crystal clear seabed that isn't very deep down.

Several small islands appear on the horizon: the nearby Pianosa and the unmistakable cone shaped Montecristo. Monte Capanne stands proud behind the town of Pomonte as do the lush vineyards in the Poio valley whose green colour stands out against the brilliant white granite cliffs. This in short is the western side of Elba: white cliffs in Chiessi, Punta Nera which is the most northern cliff on the island and that in the distance is looked upon as the "pointing finger" of Corsica.

The crumbly rocks then take the place of the hard granite. A valid reference point for sailors of the past is the Punta Polveraia lighthouse, and as you see tiny grottos and rocks rising up from the sea you can paddle as far as La Zanca and then Capo Sant'Andrea.

The northern coast in Elba is made up of lush, Mediterranean bush with Capraia and the mainland in the distance, and in this part of the sea you can often sea whales or dolphins that even swim close to the coast. Once past the majestic Naruto rocks you will get to Marciana Marina with its tower, and the chestnut trees of Capanne higher up. Paddle past Paolina's rock and your excursion will come to an end at the long beach of Procchio.