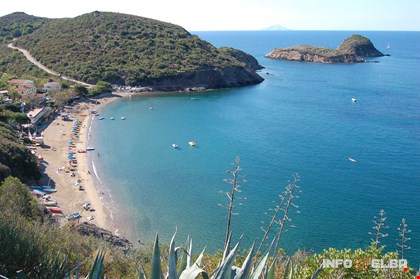 The  legend of the Betrothed  goes back to 1534, when the fate of two young lovers fell tragically into the hands of the Saracen pirates.

The historical remake, on the other hand, goes back to the XVII century, when Don Domingo Cardenas, a noble Grand Duke of Spanish origin, settled in the place where, according to the legend, Maria sacrificed her own life in an attempt to swim out to the pirate ship where her beloved Lorenzo was held prisoner.

Today, a historical procession still walks through the town streets as far as Innamorata beach; here, a contest between the crews of the various parts of the town takes place. A town crier waving a flag and a torchbearer give way to the start of the procession and are then followed by musicians, drummers, soldiers and the Captain of the Guard. The flag holder, one of the "Horsemen of the Betrothed of the Island of Elba" starts off followed by the torchbearers who light the way for the nobles in the middle of the procession. Then an elderly fisherman accompanies Maria, who is always a girl from Capoliveri.

The procession moves on with the crews from the boats of the four parts of the ancient castle, each with its own colour: blue for the Fortress, red for the Rampart, green for the Moat and yellow for the Tower. Each crew is led by an elderly fisherman, known as the "Capo Rione", and a young man from the district who has to hold the flag.

The boats are rowed towards the "Ciarpa" rock - "ciarpa" is "sciarpa" (scarf or shawl) - where the helmsmen jump into the water in an attempt pick up Maria's shawl that got tangled on the rocks when she jumped into the sea. In the meantime, the man and woman who play the part of Don Domingo Cardenas and Isabell Martorell, along with the fishermen and the girls chosen from the four quarters, await the winner who, having swum up to the beach, hands the Ciarpa over to the elderly fisherman from his district who then hands it over to Don Cardenas; this nobleman then puts it over the shoulders of the girl who has been declared the winner, and she becomes "Maria" until the following year. She will then hold on to the scarf and, according to the legend, will also find Love.