The Elba Festival, European Music Island, was fouded in 1997 by George Edelman and Yuri Bashmet in an attempt to give rise to an important music appointment as part of the international festivals of classical and jazz music.

Over the years, many international artists have taken part, from Yuri Bashmet, music director of the festival along with his orchestra the Moscow Soloists, to very young talents like Karin Kei Nagano, the eleven year old Japanese pianist who performed in 2010 at the Teatro dei Vigilanti. 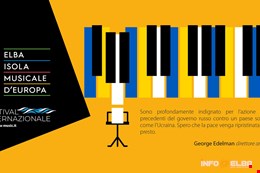 A tradition that is encouraged by the Festival, thanks to significant support on behalf of the Festival Friends Association, is the special Elba Festival Prize given to a young talent, chosen from those brought to the attention of the directors in the last few months. This appreciation reflects the true spirit of the festival, whose main aim is to encourage new artists, even by giving them the chance to confront themselves with others who are already famous.

Most of the performances will be held in the suggestive Vigilanti Theatre in Portoferraio, but as always, some will also be held in the extremely beautiful Hotel Hermitage, as well as in the Dome in Rio nell'Elba and the Madonna del Monte Sanctuary, that guests can get to on a trekking excursion across the woods above Marciana.

President and music Director of the Festival is Maestro Yuri Bashmet.

For further information on the concert dates and times visit the official web site: www.elba-music.com.

Artistic director of the festival

Music director of the Festival