Near the Scoglio dell'Ogliera, the shipwreck is there just waiting to be explored 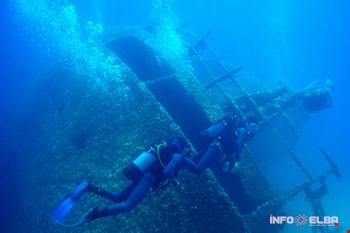 Let's dive into the sea on the south western side of Elba, or rather, near the Ogliera Rock opposite the small beach of Pomonte. Here, on January 10th 1972, the Elviscot, an Italian freighter weighing 499 tons, left Naples for Marseille, but ran onto the rocks; fortunately no member of the crew was injured.

The wreck ended up with its prow half sunk on the rocks, making it a potential risk for swimmers in the area opposite the beach. For this reason, part of the ship was quickly taken away, and the remaining part was sunk completely. Today the whole of the stern, bridge and part of the side bow all lie on the sandy sea bed, east of the Ogliera Rock, only between 8 and 12 metres below the surface; the small vessel lies on its side with its stern facing the open sea. 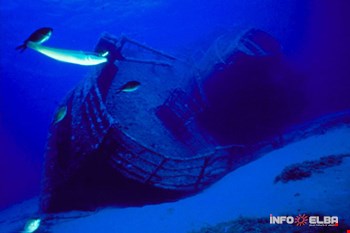 The fact that the sea is so shallow in the area, and that there are hardly any currents means that even those who aren't expert scuba divers, or those who wish to swim down with only their mask and snorkel will have no problem but they must never underestimate the fact that although the sea isn't very deep here, we are still talking about scuba diving down to a shipwreck, so they must always bear in mind to go down with the due care and attention.

We advise only scuba divers of a certain level to go down to the shipwreck, and better still if accompanied by an underwater guide.

You can see the bridge, or at least what is left of it, very clearly, and you can go in very easily through the large upper opening. Experts can go down through the funnel, thus arriving straight at the engine room, and see the propulsion machinery which is easily recognised.

Two wide openings on the stern enable you to come back up via a long corridor, and as you go along, the sun rays that filter through the slits and the portholes create magical colourful reflections; from here you get back to the bridge.

The wreck is now completely covered in sea weed, colourful sponges and marine micro organisms like the beautiful spirographs, so it is more or less a home to many species of fish. In some parts, shoals of sea breams, banded breams, turbots, soles, mullets and the odd corvina go past, while groupers, moray eels and and conger eels seem to prefer the slits in the contorted ruins of the side bow.

From the wreck you can see all the beautiful, different colours from the reflection of the sun, so keen photographers can be sure of taking fantasic shots.

Interesting fact: In September 2015 the truly unique project was taken up Luci dal profondoThe aim was to light up both the inside and the outside of the Elviscot and this amazing feat meant that for the first time in history a shipwreck was lit up, and swimmers and tourists were able to admire it from a glass bottomed boat.