A plaque tells you the distance from Elba to Berlin 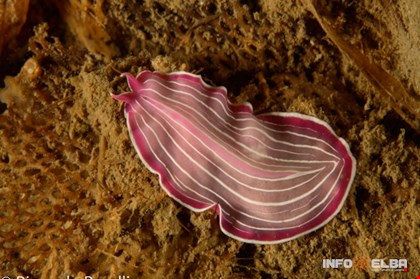 Scuba diving here can be divided into two parts: the part to the south is less challenging and is at a depth of 35 metres while the part to the north is more suited to experts and goes down to more than 40 metres below the surface.

The most interesting area in this rock, at the tip of Capo di Stella, is the eastern wall that faces the open sea towards the south.

Stop on a rocky part of the seabed at a depth of 8/10 metres that sinks deep down into the blue water as far as 35 metres below the surface. On the walls you will see the first sea whips that, the further down you go the more beautiful they get. Colonies of anthias, protected by the branches of the sea whips, peek out from the cracks of the rocky seabed.

Keep a watchful eye on your depth and also on your time because the walls go down to a depth of over 50 metres.

Much more however can be said about going scuba diving here, for example, if you shine your torch into the crevices in the wall you will see the beautiful tiny branches of red coral and you might even spy some sleepy dogfish. You will also see crayfish, large moray and conger eels, red gurnets, redfish, nudibranchs, barracudas, snappers, groupers as well as anemones, in short you will only be spoilt for choice. Now it's time for you to swim back up to the surface.

Follow the wall back up until you reach the tip that is at a depth of approximately 30 metres and here you will see a plateau of sand. Once you reach 20 metres below the surface you will see some rocks, and this is where you will see the statue of a small bear with a plaque at the bottom with the word Berlin on it, which means this is the distance from Elba to the German city, that is 1435 km.You are now more or less at the end of your scuba diving but before doing so, take a look at a tiny grotto at a depth of 18 m and you will see that the walls are covered in parazoanthus (sea daisies).