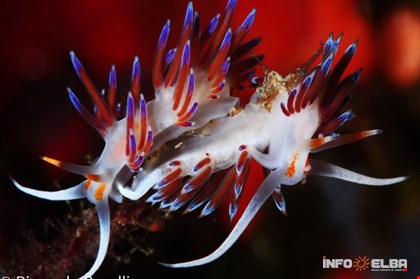 Here you can choose two different scuba diving routes: one is to swim all the way round the rock while, if you prefer, you can follow the steep wall down along the southern side of the rock till you reach a depth of 55 mNeedless to say both routes are completely different: the first you can easily do at a depth of no more than 10/20 metres and where you will see sea bream, saddled bream, damselfish, octopus, moray eels, conger eels, nudibranchs and maybe one or two groupers. If you look even closer you might even be lucky and spy the odd spider crab and, why not, even an strong>angler fish.

The second route, obviously, more challenging, is further down along the wall and heads southwards towards the open sea. The steep, south/eastern part goes right down and is rich in crevices that are full of life, sponges, mollusks, the odd crayfish, and photographers will be thrilled to see an old fishing net wrapped round the rock that goes right to the bottom and enables them to take very suggestive photos.

The slope on the south/western part of the rock, on the other hand, is less steep and reaches the bottom at about a depth of 30 metres further down. At this point the rock is covered in red sea fans.

If you keep swimming along both the south/eastern side and the south/western one you will see that they both lead to a giant rock, with rather large fields of sea whips , whose enchanting beauty will probably make you lose track of time. There are many red damselfish around the sea whips and if you're lucky you might even see the odd saint peter fish.

Be careful as regards the depth and how much oxygen you still have left because you will now be at a depth of approximately 45 metres, and the sea bed is at a depth of more than 50 metres.

As you swim back up towards the surface make a point of looking deep into the dark blue sea because you will probably seesnappers out on the hunt for food, barracudas and if you're lucky you might even see a shoal of bonitos swim past and maybe even a beautiful moon fish.