Weather conditions and forecast in Elba 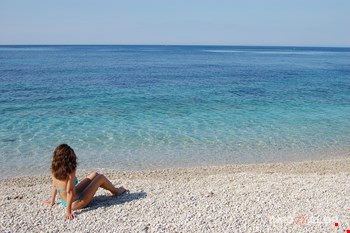 Elba has a typical sea climate, with rather mild temperatures even during the winter. It seldom rains, especially during the summer.

The most frequent wind is the Maestrale (north-west) that helps to make your days on the beach a little cooler; during the summer months the most frequent is the warmer Scirocco (south-east).

The crossings to and from the mainland are seldom cancelled because of bad weather, at the most once or twice a year during the winter months, but very rarely for a whole day.

The ice-cold Tramontana (north) and Grecale (north-east) hardly ever blow during the winter; fotunately, thanks to the conformation of the coastline, Elba is always sheltered, regardless of which wind is blowing.

²Days with precipitation equal to or greater than 1 mm. Data collected at the station in Portoferraio - Source SIR Tuscany

Forecast for the next 3 days

Sheltered beaches depending on the windElba Spiagge, Elba Traghetti and Elba Eventi on smartphones and tablets